Cloud Based ERP vs Cloud Security

Looking at Cloud Based ERP, you may be wondering if it is right for you. So let's see if we can clarify some things for you. The implementation of a cloud based ERP has become a means to increase a businesses growth in revenue, and reduce operating costs.

END_OF_DOCUMENT_TOKEN_TO_BE_REPLACED

Continuing my previous blog regarding cloud security myths we start with the next myth on the list:

The truth is cloud security isn’t new, it’s not even unique. “Security concerns are really independent of the cloud”. They’re just an extension of what's being dealt with in the physical infrastructure. Cloud computing changes the playing field but most of the underlying security concerns such as protecting the infrastructure and data are old news and within the scope of today's capabilities. Security requirements are the same regardless of physical or cloud components. Best of all these issues are dealt with by the cloud provider in most cases freeing you to focus on high priority, profitable issues.

Myth: The Cloud is a fad

Although “the cloud” became a buzzword in popular culture in the past few years, neither the concept nor the technologies underpinning it are all that new. The idea that computing should be organized like a public utility goes as far back as 1961, when computer scientist John McCarthy talked about it at MIT’s centennial celebration. It wasn’t until the Internet matured, however, that the vision became practical. Salesforce.com began to deliver applications through a Web site in 1999, and Amazon (whose owner also owns The Washington Post) launched its cloud-based services in 2002.

What’s changed more recently is the level of investment in the cloud — and that ensures it isn’t going away anytime soon. The research firm Gartner predicts that companies will spend $788 billion on public cloud services in the next four years. And the McKinsey consulting firm forecasts that cloud technology could have an economic impact of $1.7 trillion to $6.2 trillion a year by 2025.

Myth: Cloud Computing is for Geeks

A mother tells her son. “I need all my company contacts saved from my company cloud to my cloud, my personal cloud. Can you do that?” Her son replies, “Mom, you have no idea what any of those words mean, do you?”

She’s not alone. A survey commissioned by Citrix in 2012 found that a majority of American adults didn’t understand what “cloud computing” meant, with 51 percent believing that stormy weather could interfere with it and 54 percent saying they never used it — even though 95 percent actually did.

Cloud-computing powers online banking and shopping, e-mail programs such as Gmail and Yahoo, social networks, online photo and music storage, and digital libraries such as Netflix and Kindle. It’s also increasingly what supports American workplaces. The annual North Bridge Future of Cloud Computing Survey found that 75 percent of companies were using cloud services in 2013, up from 67 percent in 2012.

The basic concept is that data and applications stored remotely can be delivered over the Internet, turning computing into a utility like electricity and water. “The cloud” is just a metaphor; nothing actually happens in the sky. For individuals, it means we can use our computers, phones or tablets to access our information wherever we are. For businesses, it means they can access computing resources on a scale once available only to companies with enormous amounts of money and technology know-how. The cloud can help them get by without hiring lots of geeks.

Stay tuned for the final 4 cloud security myths in our next post.

END_OF_DOCUMENT_TOKEN_TO_BE_REPLACED 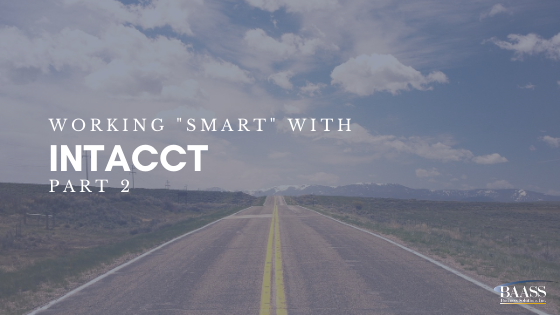 Intacct puts many powerful tools at your disposal; two in particular stand out as powerhouse customization utilities – Smart Rules and Smart Events. Today we’ll be looking at Smart Events and what they can do for your organization.

END_OF_DOCUMENT_TOKEN_TO_BE_REPLACED 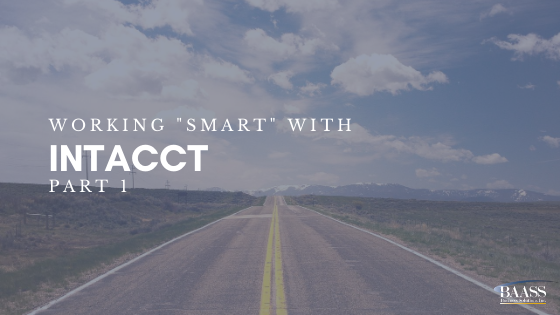 Intacct puts many powerful tools at your disposal; two in particular stand out as powerhouse customization utilities – Smart Rules and Smart Events.  Today we’ll be looking at Smart Rules and what they can do for your organization.

END_OF_DOCUMENT_TOKEN_TO_BE_REPLACED

By BAASS Consultant | May 10, 2013 12:00:00 AM
Companies today face multi-entity and global business management issues far earlier in their life cycle than ever before. It’s not uncommon for a small company to start their business in one city, then open an offshore development office, house customer service in a yet another location, and grow to have sales offices scattered across the country and internationally – all within the first few years of business. As exciting as that kind of growth sounds, it’s a nightmare to manage for a traditional financial system.

In a multi-entity environment, each office typically operates autonomously, subject to varying currency, tax, and reporting requirements – such as currency translation, exchange gain/loss accounting, local reporting, and an increased risk of non-compliance. But that’s not all they have to deal with. In addition to managing organic growth, mergers and acquisitions are common in many industry. And with each new business acquired comes more separate entities, their unique challenges, and often a second financial management system.

Presented with these challenges, finance team often struggle to perform critical tasks such as consolidation, reporting, and analyzing operational and financial information across the disparate sites. They are forced to use cumbersome spreadsheets and add-on reporting solutions along with their traditional financial systems to try to cobble together meaningful data to help management make informed decisions. Instead, the process is manual, slow and error ridden. Data from the multiple entities is collected and consolidated manually, currency conversions are calculated by hand, and the number of inter-entity adjustments and eliminations increases.

The use of multiple systems and the lack of automation lead to two critical problems for multi-entity or global businesses: diminished operational visibility and a dramatic increase in cost.

Read the rest over at Intacct's blog here

END_OF_DOCUMENT_TOKEN_TO_BE_REPLACED

When your Accounting System is Bigger than You

There can be many reasons why your current accounting system no longer makes sense for your business. Maybe your company didn’t grow as big as you first anticipated. Maybe you had to downsize and let staff go. Either way, the end result is the same. You are losing money by maintaining an accounting system that is too big for your needs, as well as the expensive upkeep of servers and workstations.

END_OF_DOCUMENT_TOKEN_TO_BE_REPLACED

Why would you want your ERP in the cloud?

BAASS Businesse Solutions has recently become a Certified Intacct Reseller and when talking to client and prospects about this new Cloud ERP offering we often get asked the question above.

If the above resonates with you, please contact us to discuss how moving your ERP system to Intacct and the Cloud might be beneficial.